Ancient Omma
is everywhere
existed before all.
Heals in healing herbs
and in holy wells
flourishes in the grass so green.
(Karin Thelander; Förtappade systrar)

Omma is, assumebly, an ancient Mother Goddess. In the county of Östergötland, Sweden, the not very high hill Omberg (literally Ommas hill) that stretches along the eastern shore of Lake Vättern from Borgholm to Hästholmen, was her sacred place of worship.
There are many myths and legends about Omma but, as always when dealing with prehistory, not many facts to follow.
That she was a Mother Goddess we can assume from her name. Omma, Amma, mommy are all closely related words (mammoth is probably also related, in ancient European tradition these huge mammals were closely associated to the Goddess).
When looking for goddess traces, one must move in circles and always be aware that the written ‘facts’ that are available are facts from a rather narrow patriarchal perspective.
In Hellquists Svensk etymologisk ordbok (Swedish ethymology) it says that Omberg, in old Swedish was Amobaerg meaning misty mountain. Also that ”omma” is used in the area when the hill is covered in mist.
It is true that in the area surrounding Omberg an old colloquial expression for for when it’s misty is that it ”ommar”. But that is any mist and actually Omberg is not a very misty hill, the mist mainly stays in the flatland surrounding the hill.
The connection between the hill and the Goddess is relinquished, the Goddess herself becomes nonexistent, when, not unlikely, in the olden times it could well have been that it was believed that Omma herself took the shape of mist or actually was the mist. That it was one shape she took in the visible world.
To clarify how the relationship between goddess – humans is hidden I’ll take another ethymological example.
Harmony: ”literally “means of joining,” used of ship-planks, etc., also “settled government, order,” related to harmos “fastenings of a door; joint, shoulder,” from PIE ar(ə)-smo-, suffixed form of root ar- “to fit together.”
Harmonia is a preOlympic Goddess, daughter to Aphrodite and Ares. In Hamonia the opposites love (Aphrodite) and war (Ares) were united. Unlike Omma, Harmonia is both depicted on objects from 500–400 BC and described in a number of texts. Yet she has ‘disappeared’ when the word her name has given rise to is derived. From the Goddess Harmonia to ”means of joining,” used of ship-planks, etc., ” there is quiet a distance. But this is this pattern one encounters over and over again when one starts exploring the goddess sphere.
Whatever I write about Omma can be my, or someone else’s (on which I base myself) free fantasies just as Hellquists fantasises when excluding Omma and Harmonia when explaining the ethymolgy.

Another example on how ’facts’ around our prehistory constantly changes; in 2002 I was told that I could not place a story set during the Stone Age to Omberg - there were no people there then, they only came much later. The reason I had situated the story in the Omberg area was of course Omma. Mother goddesses around the world has been connected to hills and mountains (eg the highest mountain on Earth, Chomo Lung Ma, which means Mother Goddess of the universe, but during Western cultural imperialism in the 19th century was renamed Mount Everest) also Omberg is special enough so I imagined that people then, as they do today, were drawn there. Also it was a good place to live if one was a gatherer and hunter. There is plenty of clean water, lake Vättern and a lot of springs and wells on the hill itself. There was ample of food from two different biotopes, the hill and the surrounding flatland, as well as fishing in Vättern and hunting on Omberg. In the summer of 2003 excavations were conducted at Omberg and they found remnants of Stone Age settlements. So 2002 I was completely ’wrong’, a year later I was ’right’.

One of Ommas attributes is the owl. In a legend, she is said to be a healer who lived on Omberg. So that no one would see her face, she wore an owl mask. She had an apprentice and when she herself grew old, the apprentice took over the owl mask and in this way Omma was perceived as immortal. In this way she was changed from immortal Goddess to a human healer, and the myth of her took on a more acceptable form for 19th- and 20th-century humans.
Many Mother Goddesses has the owl as an attribute, which is why it is perhaps not so strange that Omma has a namesake in India – with her own hill and owl attributes. The owl stands for wisdom – the one who sees in the dark – but also for death. Omma is, like all Mother Goddesses, not only the goddess of life but also of death. 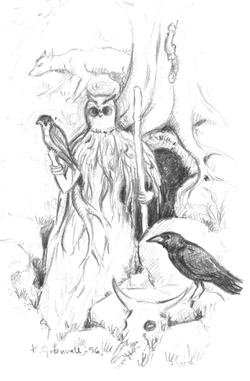 In the ritual song Omma once gave me, we sing about her attributes when we call her into our holy circle:

Oh you Omma, Great Mother
old Queen in the hill.
You who speak through the mist
you whose song in the stone is sung.
Give us your water of wisdom
source sprung up from Earth.
Whereby we connect ourselves
creating beauty, chaos, clarity.

The stone, the bedrock, is hers. It is the primordial force and the stable foundation. But Omma is not just grounded stability, just as important, she flows from her living waters. With her springs she cleanses and heals. And like all Goddesses, she finds pleasure in the movement itself, in the cyclic change. She is chaos and she is rebirth. As a force of death and chaos, she breaks down the old to make way for the new. Her beauty is in that very movement. And that movement is the natural circle and natures wonderful, obvious beauty,.

Omma as a creator

“In the beginning humans worshiped the Creator of life, the Mistress of heaven. At the very dawn of religion, God was a woman,” writes Merlin Stone. Omma is certainly creator of life, but she has probably never been the mistress of heaven. She has not, like Urd, elegantly spun her spindle – the pole star – so the vault of heaven rotated. No, Omma is firmly rooted in the rock, in the earth. She’s the initial solid foundation.
The Alvastra chronicles, which is played in the monastery ruins at the foot of Omberg, depicts the history of the Omberg region, since the beginning of time. First there was Omma and she gives life to a people with the right to the land, to hunt and to fish. “But no one is allowed to own land or kill for the sake of gain,” says Queen Omma. In the chronicles, she is the Great Mother and her people are the indigenous people. Then Omma’s people are invaded by other peoples with other gods and Omma’s position as creator is eventually taken over by the Asirs and the male gods will increasingly come in the foreground. They in turn have to give space to the Christian god when the monks build Alvastra monastery. As a description of history, it is consistent with the development that Professor Gimbutas have found evidence of in Old Europe and with what Birgitta Onsell describes in Jordens Moder i Norden (Mother Earth in the North).

Omma as a living source of power

To work with Omma and her power is to anchor oneself to the earth, to partake of her firm ground and the beauty of nature. It is to dare to face her chaotic power and move in the dark without knowing either path or goal. It is also to move into her wisdom, the affirmation of life, where life moves towards death and death moves towards life. In an eternal circle.