When I first came across Ananke, through fiction, I was completely fascinated – a goddess who is Necessity. A deity who is greater than and more incorruptible than fate. An underlying force that shapes what must be shaped – but only that.
In the beginning of time, Ananke emerged from herself as a snake whose arms enclose the entire universe. She is the goddess of Necessity. Invisible, untouchable, elusive and indomitable in their contact with both deities and humans.
In Marriage of Cadmos and Harmonia, Calasso tells how Zeus, who was born into a world that was already old, reflects the past;
“On the part of history that only he among the Twelve knew and that crossed his mind every time something fatal would happen. …
In the belly of Zeus all that had been and all that was to come was gathered. … In his appalling loneliness, Zeus saw the life before his birth. … He thoughts went further and further back, past his father Kronos, and finally stopped at a point that became the final one, because it was the first.
Then there was no space, but a convex surface that was covered with hundreds of thousands of scales. This surface extended beyond what the eye could see. If one followed the scales downwards, one discovered that they merged with other scales, in the same color, and the two parts intertwined into each other in an ever tightening braid. The eye lost focus and could no longer distinguish the two snake skins that wound into each other. If one looked upwards, towards the heads of the two entangled snakes, one saw that the body of the first snake rose further up and the scales were no longer scales, but formed the face of a deity; this was the first face that testified to what a deity is, and on each side were seen other heads, a lion and an ox, and from the back rose a pair of huge and beautifully patterned wings. A white female arm went in and around the god’s arm high up, just as the snakes’ tails were tied together at the bottom. Toward the face of the god the woman’s face turned, and she stretched out her free hand, behind which the mighty wing vibrated, as far as she could: where her fingernails reached, there was Everything’s limit. They were an immobile and royal couple: they were called Time-Without-Age and Ananke.” 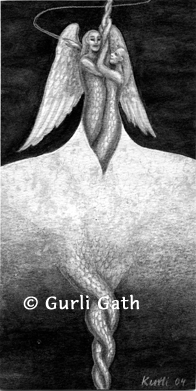 Here Calasso describes Ananke as a woman instead of a goddess and Kronos as the first deity. We don’t know why he does that, but as a mythologist he should be aware that Ananke, in most of the Greek myths, is the one who existed first and foremost. But that’s one of the charms of Marriage of Cadmos and Harmonia, Calasso allows himself to be just as inconsistent as the oral myths are.
She mates with Kronos – time. So far, the myths agree. But the results of the hieros gamos (sacred intercourse) may be different. Or maybe the result is the same? “Together they encircle the primordial egg of matter and divide it into earth, sky and sea, thus creating an orderly universe,” says one source, while another says: “They are forever intertwined and from their intercourse were born Ether, Chaos and Night.”
Chaos, we have learned, is the opposite of the cosmos. But is it not really the same thing? Can there be an orderly universe, the cosmos, without the movement of the forces of chaos? A cosmos without chaos will it not just be a frozen image?
But what then is the difference between Necessity and Destiny? It is thought that our destiny can be influenced, but it is also considered that it is not possible to change. Maybe we can shape it, maybe not. We do not really know and the myths does not tell us that either. The goddesses of fate spin our thread of life and weave the web. And they are always goddesses. The god of fate has never existed. Gods can be heroes or lunatics. They affect people’s lives, but they are unable to spin the thread or weave the web of life.
Perhaps we are able, or not, to shape destiny, but neither deities nor humans can affect or impinge Necessity. Necessity is adamant.
Therefore, Ananke has no temples or places of worship. Why would people pray to her who doesn’t listen? She who lets the necessary happen – regardless of what deities and people do. This is the reason why she doesn’t accept sacrificial gifts and why people have not created statues of her.

In this new age, represented by the deities of Olympus, the deities continue to submit to Ananke but also to use of her. People, on the other hand, can only submit. Still, they try to free themselves from her. They create polis, a public space, a context for free men, those who do not see themselves as bound by Necessity. Women do not have access to polis, they are automatically bound to the Necessity (and are perhaps not really real people?) because they are the vessel for the man’s children. Of course, the slaves do not have access either, just as farmers, traders, artisans and those who govern the city-state are excluded from the polis because they are bound by Necessity. What remains is a small handful of men who can have dialogues about life’s big questions. The dialogues are conducted in men’s way, not primarily to understand each other but in competition. The most skilled in rhetoric, reasonably original and clearest in thought is given the opportunity to achieve immortality – not in body but by name and ideas. This is how a male elite tries to tear off Ananke’s shackles. But Euripides lets Queen Hecabe, in conversation with Agamemnon, say: “A free man? - Such a thing does not exist! All men are slaves… ”

Since the physical body actually dies, the free men are still bound to Necessity. They could not have been unaware that it was only from a human point of view that they were free because they did not need (or had the privilege to, depending on perspective) deal with the realities of life. From a cosmic perspective, they, like all other living beings, were subjugated Ananke.

Ananke is the mother of Moira, the goddess of fate. Moira only has a mother, Necessity alone breeds fate, no one else is needed.
In Nordic myth, there also was a goddess of fate - Urd. Eventually the fates became three, both in Greece and in the Nordic countries. Moira was transformed into Moirai and was named Klotho, Atropos and Lachesis. Urd was divided and became the Norns Urd, Verdandi and Skuld. Their function as spinners and weavers of life and destiny seems similar.
In the Nordic countries there is no Ananke, no Goddess of Necessity. However, she is represented in our runes. The Nau∂ rune represents Necessity, the Norns in their unyuelding aspect. And it’s so difficult for us to accept the influence of Necessity over our lives that Nau∂ has become destitution has become poverty and scarcity.
Sometime, somewhere, in another time, we displaced and lost the knowledge that Nau∂ is the ninth rune, the circumference of the circle, Ananke’s arms that enclose the cosmos and is life itself.