You can read about the nornes both in Eddan and online. Sometimes it is the most fantastical tall tales, but since we don’t really know, anyone can fantasize freely on their own - so can I. Snorri, on the other hand, had to portray the world of gods as if the deities were formerly living people that we made into gods, so as not to make the Christian clergy angry. If he himself believed what he wrote, I leave unsaid, but his interpretations are often far-fetched when he tries to give our ancient Nordic myths Christian shroud. However, we can be grateful to him because it is largely thanks to him that we have ancient Nordic myths to relate to at all.
It is said that there are nornes of many lineages, it is also said that every human being has a Norn who follows one through life, that Nornes and fylgia (similar to a power animal in Native American tradition, except the fylgia is not necessarily an animal but can take any shape) are the same. I will not go into that discussion here, what I intend to discuss is the Norns - the goddesses of fate - focusing on the Norn Urd who is the origin. 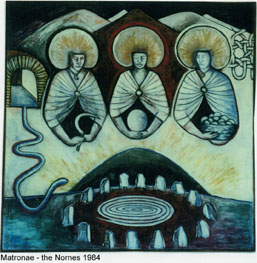 Painting: The Norns by Monica Sjöö

Urd is probably an ancient goddess, an aspect of the Great Mother. She was not an Asynja (female Asir) because she was here long before the Asirs migrated to the North. Nor is she a Vanir, she was ancient already when Nerthus / Njord, Freja and Frej entered our pantheon of deities. Long before that, she spun her spindle, the pole star, and thereby created time. How can I know? Well, I can‘t know - maybe even this is a tall tale without any anchoring in the great myth of the creation and existence. But I do not think so. Both her name, Urd, which is associated with origin as well as destiny, and her role as a spinner, indicate something more than a fortune teller.

We get knowledge about the Great Mothers and the myths by reading. We can only gain in-depth understanding by meeting them. That’s why I’m sharing one of my most important meetings with Urd:

It’s Sunday in Seattle. Since last Thursday, we, a circle of 22 women led by Grandma’ Shirley, have been working, eating, sleeping and working again. We have not left the house, we have eaten together and slept together. And worked. Intensively. I have participated in the other women’s life-stories, have taken roles in psychodramas, worked with energies and been intensely involved. But I have not yet done what I came to do. And I still do not know what it is I need. I just knew I had to come here. I felt it strongly and the Nau∂ rune confirmed it. But now I’m starting to wonder if I’ll have to go home without accomplishing what I came here to do, since we’ll be leaving in a few hours. Sheila comes up to me and says “Grandma’ says for you not to worry, you haven’t come here across half the world only to be part of the circle. You will be doing your work this afternoon”. Once again, I’m fascinated by how Grandma’ knows what’s going on within us, and I relax Has she said so, then so it will be. I’m preparing to show myself and see myself in a drama because Grandma’s medicine above all other is “E yey mitsche e ya” - I come and see myself.
When it’s time, Grandma’ tells me that we are doing a drum journey. I’m a little disappointed, and think to myself that journeying I can do alone, by myself. At the same time, I know that Grandma’ knows what she’s doing and if she says I should journey, so be it.
I lie down, Grandma sits down next to me and the drums begin. I set off at rocket speed along the trunk of the world tree. It scratches my skin and far away I hear Grandma’s voice “Take it easy, go slower, you’ll get there without a rocket in your behind”. I grin a little to myself and slow down. I travel far and deep, further and deeper than I ever have before. Grandma’s voice is becoming more and more distant and I no longer know if I answer her audibly or if the words stays inside me. The only thing I know for sure, the only thing I have to stick to is the trunk of the World Tree. It’s tangible, I feel it, it’s the only thing real. Now it’s just me and the trunk, the drums doesn’t exist, Grandma’ is gone, so is the circle and the room . A tinge of fear tries to pull me back, but I stop it and think that no matter how deep I travel, Grandma’ will be able to bring me back, so I continue along the trunk.
Then I spotted some water and see a huge woman standing there. I see that it’s a well surrounded by a root. I understand that it’s Urd’s well and Urd I’m meeting. But she doesn’t look as she has when I’ve met her before, now she looks more like a giant and her eyes are like glowing coals. They’re burning right into me. She grabs me and says:

Then she lifts me down into the spring and holds me tightly. Eventually I feel as if I can’t hold my breath anymore, my lungs ache and lightening is flashing in my head. I’m trying to get loose but I’m held by an iron hand. Finally I can no longer hold my breath so I inhale water, I suffocate - do I die? When the pain is total and I feel as if I’m moving away from life, she lifts me out of the well. For a long time I lie there gasping before I can breathe, before I can see.
When I come to my senses, she stands in front of me, behind her are Verdandi and Skuld (initially Urd was the Norn then she was divided into three, the other two being Verdandi and Skuld). Urd’s eyes are no longer glowing coals but mild and blue as the well itself.
She lifts me up, puts her hands on my shoulders and says:

Then everything disappears. I am in a fog, compact, quiet, impenetrable and harsh. Did I actually die at Ur∂arbrunni? Am I on my way to Hel because Urd said I was consecrated to Hel? It’s restful in the fog and I stop thinking. Eventually I hear Grandma’s voice, in a distance. She’s calling me, I can hear that. But I feel good where I am, resting peacefully, so I don’t listen. Gradually her words penetrate me and I begin to orient myself towards the voice. Then I hear the drums and feel that I am on a floor, slowly I become aware of the room and the circle of women.
The circle of women, Grandma’s wisdom and my own courage have made the encounter with the mystery possible and given me the privilege of experiencing one of the great myths.
Within the scientific paradigm, the myths are profaned - the great myths that connect the ancient cosmos to the human world. They are tchanged into prosaic everyday realities. Urd’s well, the holiest of all, which in the myth is found at Yggdrasils third root, is changed into a sacrificial well at the altar in Old Uppsala, excavated by national antiquarian Martin Olsson. This is how you profane the sacred, the great mysteries and make it into a small everyday reality where we humans are the ones who have control over all things. The deities become fairy tales and fantasy and thereby we can maintain the image that humans control the world.
In this way we get apparent control instead of life, domination instead of mystery and opportunity. Then life becomes impoverished and our power is depleted. We become obedient tools to ‘the market’ who swallow that consumption and happiness are one and the same.
Thereby the power of domination, instead of the Powers, guides our lives. The ancestral mothers knowledge is banished, and the emptiness is filled with purchased things.
This is what today’s myth of happiness looks like. However, we can still choose the great immortal myths, journey into the web and let Hel heal us.